I was going to say that I haven’t always worshipped at the altar of technology, but that just wouldn’t be true. I was once a guitarist (not a good one, mind you,) and once I’d gotten the basics down, I moved onto the weird gear fetishism that seems to affect many musicians. Being a poor teenager, I started with a cheap pawn shop strat copy and a ZOOM 510 “Dual Power Driver,” purchased at the local guitar shop because they didn’t have the ZOOM 505 that my friends had. While it was cheap plastic crap with a cheap digital sound, it and the 505 started me down the path of collecting and using weird things to process and warp my sounds into something new.

I wasn’t and still am not very skilled with a guitar. Back then it didn’t matter; garage bands are expected to be less than perfect and power chords are more than satisfactory for most needs. I didn’t care much anyway, what I was more interested in was something akin to sonic sculpture. It started with that 510 pedal and a positively ancient compact cassette deck with two mic inputs for left and right, along with the standard RCA jacks in its back. I can’t recall how I managed to do it now, but between a guitar, a dirt-cheap Gorilla combo amp (which, along with a couple other models, was inexplicably infamous amongst my friends,) the tape deck, the pedal, and a tangle of cables, I ended up synthesizing noise, with one of the mic inputs’ gain acting to either filter or change the color of the noise. I sat alone for far too long twisting knobs and listening to the outcome while recording it to a tape that’s undoubtedly been lost or erased. 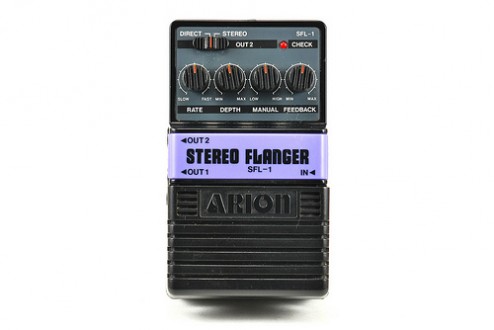 I also miss this stupid thing. I got one in Mexico for fifty bucks. I was probably ripped off.

After some time, I ended up with better hardware (though my amps were always fraught with issues) and amassed a collection of effects devices ranging from mundane to esoteric. Some were run of the mill distortion, or the aforementioned cheap ZOOM box, but only a couple really stood out to me, the first being the DOD FX65 Stereo Chorus, which is still to my ears one of the most gorgeous-sounding effects ever. I’ve had two, and refuse to let go of the second one after foolishly selling the first one. I love my chorus pedal. The other outstanding FX box I’ve had (and miss) was the Electro-Harmonix Micro Synth, a weird filter bank for guitarists that turns your axe into a sweepy, bleepy bloopy faux synthesizer, and it’s probably the reason I’ve since delved deeply into analog (or analog modeling) subtractive synthesis. It never really found a home in any of the songs my band wrote, since synths probably aren’t very punk, but I toted the damned thing around anyway, just to noodle and make strange noises between songs while everyone else laughed at the novelty of such a thing.

Today filter banks and square waves aren’t novelty, they’re a way of life. I’ve got access to a multitude of effects devices and sounds but know better than to drown my instruments in effects and dial everything back a bit. Except when I don’t.