…There was the MTV Music Generator. And it was… adequate. Known as Music 2000 everywhere aside from the United States (not to be confused with the BBC’s take on what music would sound like in the future,) it was what I suppose could have been considered a tracker. It included on its CD hundreds of samples of drums, various recorded synth notes, and sound effects, and provided a rudimentary sequencer to arrange your samples.

I first got my hands on this disc sometime shortly after the year rolled over to 2000; a friend had called me up excitedly explaining just what it was and how it worked and I could barely wrap my head around it at the time, having difficulty comprehending that it wasn’t a game, but instead was for creating music. Before this, my exposure to creating music involved guitars, amps, microphones, and mixers. Electronic music was still a mystery to me, despite owning a few odd records by then. My peers at the time were less interested, some just being a bit bemused by my odd tape and effects experiments, others flat-out opposing electronic music for some strange reasons, going so far as to occasionally shout things such as “HECK NO TO TECHNO!” I suppose it was the “Disco sucks!” of the modern era.

Anyway, I quickly traveled to the local electronics/game store to grab a copy, killing my car in the process (I blew its head gasket on the way back home.) Once I finally had it in my console, I fumbled with its awkward controls and plugged in various pre-recorded loops and ended up with something that resembled music, only pre-packaged and forgettable. The program (it isn’t really fair to call it a game, even though it ran on a game console) came with a stock of hundreds of pre-made “riffs,” or sequenced loops that act as building blocks for tracks. Some were melodies, some were drumloops, some were one-shot sound effects and percussion. Most were terribly generic and after playing with them a bit, I quickly pulled them apart and figured out how to construct my own, using the various samples provided. Within weeks I was more familiar with the software and could quickly work out weird songs filled with bleeps and bloops, random shouted words and phrases, and obscenely deep kick drums.

Since the PlayStation was limited to 2MB of RAM, one was limited to 24 tracks (tracks being “individual sounds” in this case,) and when loading samples, you could select lower quality sounds (22KHz and 11KHz sample rates) as well as the standard high quality samples. This led to what I’m sure was some “grittiness” in tracks recorded to tape (which, of course, added its own sound) or MiniDisc, even when using the apparently superior SCPH-1001 model of the PlayStation. Nowadays this crunchy low fidelity sound is desired and emulated through various means, but then it was just an unavoidable complication.

The interface was clunky and blocky, adapted for use with the old PlayStation controllers, and navigation through the sequencer, samples, and pretty much everything else was an exercise in patience and frustration, scrolling through screens and menus with a sort of cursor controlled with the D-pad. Trudging through weird menus and popups was my first foray into creating electronic music, preparing me for questionable UI design for years to come. 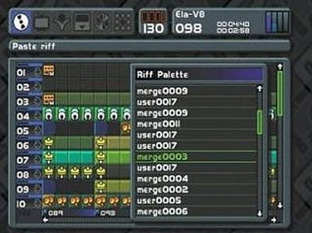 There were also options for more advanced sound design, allowing one to combine samples, sample audio from CDs, and draw various envelopes for effects. The sample quality was, again, not terribly great and using your own samples devoured most or all of the memory available, leaving little room for other instrumentation, and combining samples to save memory led to weird broken sounds more often than not. Additionally, quite a few save files were corrupted after fiddling with envelopes. You’d open the file, something would sound very strange, and you’d find the envelope you drew now has 255 points to it and had turned from something recognizable like a standard ADSR envelope into a horrifying spiderweb of noise. It was best to stick to the stock sounds.

Some of the songs we created with it were great, and have been recreated with more modern, feature-laden DAWs, remixed to death, and finally laid to rest. Some of the stuff I made was just weird, never really having a structure or melody, just the sound of someone learning to write music. Some were simply disposable noise experiments, better left forgotten. It was a great, if not cheap and almost toyish, introduction to writing dance music, and not too terribly long after I started using it I was introduced to the local rave scene, which was, despite being a bit behind, expanding greatly.  After a couple years using the Music Generator and a little bit of research, I graduated to bigger, better things, getting my hands on Reason 2.5 and learning more about sound design, synthesis, and mixing. I’ve stuck with it ever since, and while I know my way around subtractive synthesis, sampling, and more complex audio production, I still miss some of the tracks I made with the Music Generator, which are now undoubtedly lost to demagnetization, disc rot, and disorganization.