The Thirteenth Step is now Killhamster 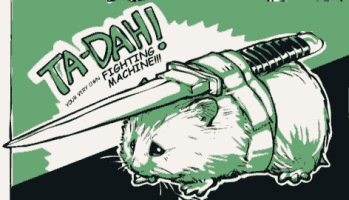 For over a decade I have been producing music under the moniker “The Thirteenth Step,” a name I chose because it sounded kind of cool and had weird metaphysical implications. I bought a domain to go with it shortly before A Perfect Circle announced their second record, so I got lots of traffic from people trying to find that and instead encountering a shitty site filled with wierd mp3s and terrible old PHP CMSes. At some point I let the domain registration lapse and it was snatched up by some weird new-ager who’s shilling some book about his past drug habits. At this point he’s just squatting on the domain and blogging elsewhere.

So I have this issue of dilution. I never had much recognition to begin with, and people were confused by the existence of the APC album and this guy going on about not drinking. I was hanging on to it out of habit at this point while in every other aspect of online interaction I’ve been known as Killhamster, going so far back that it’s lost to the ages. Why not just assume my own identity for my musical projects? This is why I’ve gone ahead and adopted Killhamster as my name as a recording artist, along with my random internet troublemaking. It’s weird enough to be memorable, it’s most definitely me (except for this one dude who posts on some German gaming forum. I hate that guy,) and it’s very well-established (even though some of it ties to pure awfulness.)

So from this point on, I’m just Killhamster. Except when I’m RBM, but that’s a totally different story.