Some time ago, Samantha (my fiancée,) asked me “why don’t you ever write any French house music?”

The answer is “because I am awful at it.”

This was before the latest Daft Punk record had dropped, so we hadn’t yet been disillusioned and I sat down that evening with the intention of quickly working out a funky, pumping house track that abused my compressors and made them run crying, and found instead that I was the one who should be crying. I’m used to certain song structures, certain melodic elements (just kidding, I’m terrible with melodies,) and certain production tricks, so exploring a genre that was alien to me could have been a learning experience.

What I learned was that I was far, far out of my comfort zone. I started with just a few funky bass loops and a drum machine loaded with some bare-bones house-ish drums to build a foundation, thinking “super funky bass has got to be the key to this,” keeping Daft Punk’s Around the World in mind, remembering seeing the video for it for the very first time late at night on MTV’s Amp, an incredible mind-fuck at the time, especially if you’d never been exposed to anything like it before. 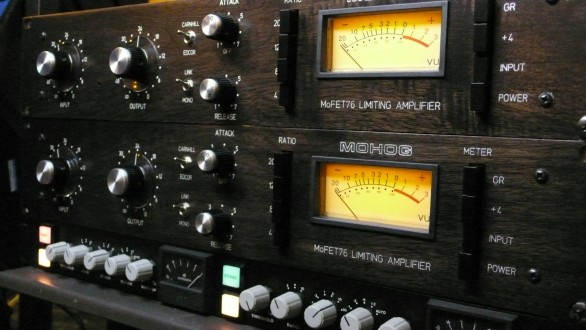 Anyway, I set about fattening and compressing my bassline, settling on four obscenely funky loops and starting with a simple arrangement, building a fairly straightforward progression through the drums, bass, and a few other sampled elements such as a guitar playing a riff through a wah pedal, some brass, and a thicker guitar loop to drive things along, sidechaining each one to a kick drum to give them that throbbing house track feel. It felt alright for a start, so for the next few days I tinkered with it, adding parts, moving things around, refining it, dropping filters and phasers everywhere.

After this it stagnated a bit. I gave it some real structure, a weird solo, and more parts, but it just never quite coalesced. Melodic elements are my weak point, and it definitely showed in this case. There was no hook, just a series of wandering loops and robot voices that didn’t quite want to coexist. Regardless, I kept coming back to it and banging my head on it over and over, trying to find that bit of magic that would transform it into something impressive.

I tried to give up. I tried to set it aside and work on other things, but I kept coming back to it. After letting a few others hear it, they confirmed what I did not want to face: there was no real melody, no hook. Frustrated, I tried to add little melodic bits that didn’t work; pianos, synths, guitars, nothing would work right. Finally I found a weird clavinet sample that was run through an auto-wah, which I then ran through an envelope follower to another wah, essentially creating a second auto-wah. It was harsh, it was aggressive, and it stood out enough to catch a listener’s ear. I’d finally harpooned my white whale. After a little more rearrangement and a night dedicated to wrapping up the EQ and “mastering,” I finally felt like it was finished instead of insurmountable.

Anyway, here it finally is, after much frustration: